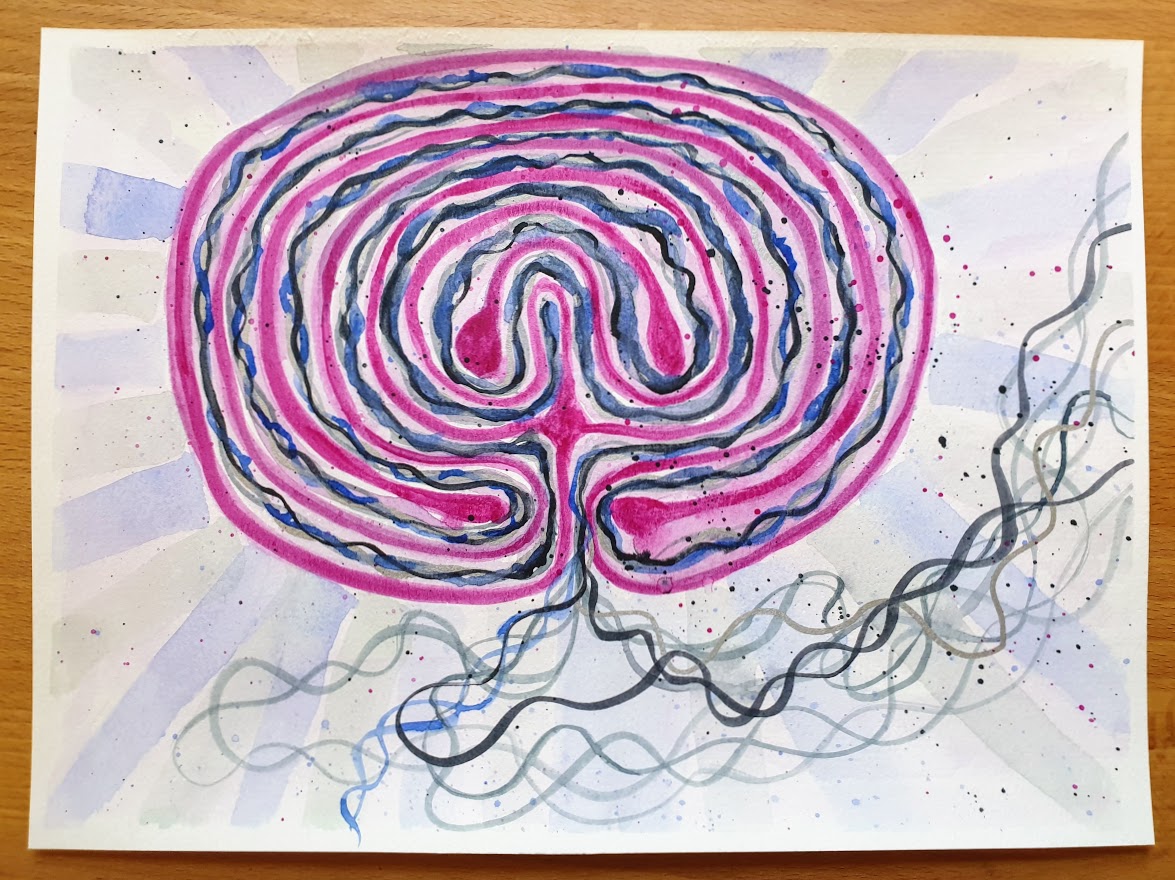 The third stage – the birth of your baby’s placenta.

I find myself thinking a lot about placentas this week!  I’m having a lesson plan overhaul in preparation for my January NCT courses and I’ve decided to tweak the way I facilitate my groups learning about the third stage of labour.  At the same time, a birth doula client, due to meet her second child in March, has been considering her preferences around the immediate postnatal period and has decided to try to avoid cutting the baby’s cord until after the placenta has been born, in an attempt to protect the precious golden hour of skin to skin with her baby.  I was moved to create this piece in response, depicting the placenta as a labyrinth, which will always lead you the right way eventually if you trust the path and let it flow.

As is the case with so many birth interventions, many birthing people and their partners are unaware of what their options are for the final stage of their baby’s birth.  The ubiquitous application of drugs to expel the placenta, the time limit placed on how long this stage should take, and the rush to cut the cord as soon as possible, have left many feeling that women’s bodies are unable to accomplish this feat unaided.

It’s vital to recognise that the placenta is part of the baby, not part of the mother.  It is a foetal organ and it is as much part of the child as his heart or lungs.  When the placenta detaches, the uterus can bleed, and in a minority of cases, this bleeding can be severe.  For this reason, the NICE guideline [CG190] is clear that women should be offered “active management”, which involves administration of artificial oxytocin by injection, the cord being cut within five minutes of the baby’s birth, pressure being placed on the womb to encourage it to contract, and the placenta being pulled out by the cord.  This procedure has been thought to reduce the risk of postpartum haemorrhage… But a review in 2019 stated the following:

Overall, the quality of the evidence was generally low or very low and we need more data to be confident in the findings. For all women, irrespective of their risk of severe bleeding, active management may reduce severe bleeding and anaemia. However, it also may reduce the baby’s birthweight and increase the mother’s blood pressure, afterpains, vomiting, and the number of women returning to hospital with bleeding. For women at low risk of bleeding, findings were similar though there was no difference in risk of severe bleeding.

It may be useful to think of this from the mother-baby dyad’s point of view.  Often, after a brief moment of skin to skin, the baby is taken away from his mother while this active management is taking place.  He is handled by several members of staff, disrupting the delicate microbial seeding of his skin and mucosa. He may be weighed, checked over, wrapped up.  His outrage eliciting lusty cries and thrashing as he searches for his mother’s body.  Her brain responds with a surge of adrenaline, all systems alert to the threat her baby is broadcasting.  Her midwife soothes her with a hand on her abdomen, pushing and massaging to speed the expulsion of the placenta.  The baby may now meet and connect with his other parent for the first time, being carefully cuddled and adored by the person whose voice he recognises so well from before his birth.  He may experience skin to skin with this parent.  Soothed by and learning from this new heart rhythm and novel experience of smell and touch, he calms and rests.  But he may just be sleepy and weak, missing a proportion of his blood volume which is still in the placenta, still inside his mother’s womb.  He may be at lower risk of neonatal jaundice thanks to this reduced blood volume, trading this risk factor for that caused by lower birth weight, and lack of breastfeeding initiation.  Meanwhile, his mother is rocked by artificial contractions, unbuffered by the pain-relieving endorphins that her baby could have elicited in her if they were still in contact.  She looks over at her lover and their child, a small rush of love blunting her discomfort as the placenta is removed from her body.

Let’s have a think about what could be happening in that time instead.  If the cord is not cut then no-one can separate the mother-baby dyad.  With the cord still connecting them, they can rest and start to get to know each other.  She can follow her instinct to touch, caress and explore her baby, synching their microbiomes fully.  Their eyes can meet and that moment of recognition and connection can cause a hormonal cascade in both their brains, releasing oxytocin and endorphins.  Her uterus contracts.  The baby recovers from the birth between his mother’s breasts, the blood flow to her chest increasing or decreasing to warm or cool the child as his own internal thermostat flickers into being.  The familiar sound of her heartbeat soothes his agitated systems and he relaxes, knowing he is home.  In time, he notices that her areola carry the same smell as the amniotic fluid he has been familiar with for all of his existence.  His neonatal feeding reflexes awaken.  His head bobs and his mouth explores.  His knees and feet massage her shrinking uterus.  Inside, the placenta detaches.  Encouraged by his cues, she instinctively moves him towards the nearest nipple.  He stimulates it with mouth, tongue, fists and nose until a small drop of colostrum forms on the tip.  He latches.  He feeds.  Another endocrine cascade is initiated and her next rush of oxytocin causes her uterus to contract again, pushing the placenta down and out.  Her partner never left them and the three, skin-to-skin-to-skin are lost to the world beyond themselves.

Some families will choose to cut the cord at this point, or before the birth of the placenta, or not at all (allowing it to detach naturally some days later; a full lotus birth)

Families need to know that they have the option to move from a physiological (natural) third stage to an active (managed) third stage at the first hint that all is not well; if the mother starts bleeding heavily, or if the baby needs special care.  It’s also possible to have a managed third stage with the baby still in his mother’s arms throughout, although they won’t be as undisturbed.

It’s also not necessary for the baby to be weighed immediately.  There’s no rush.  Babies who are weighed soon after birth may stay calmer if weighed prone (on their tummies) as they can feel less vulnerable that way, which helps everyone else stay calm too.

Whatever decisions you make about the birth of your baby’s placenta and your baby’s first “golden hour”, remember that humans have evolved over millennia to dance this intricate hormonal dance together.  The umbilical cord is there for a reason.  Choosing to leave it intact, at least for a while, is a great way to avoid unnecessary interventions in the third stage of labour.

Want to join the discussion?
Feel free to contribute!