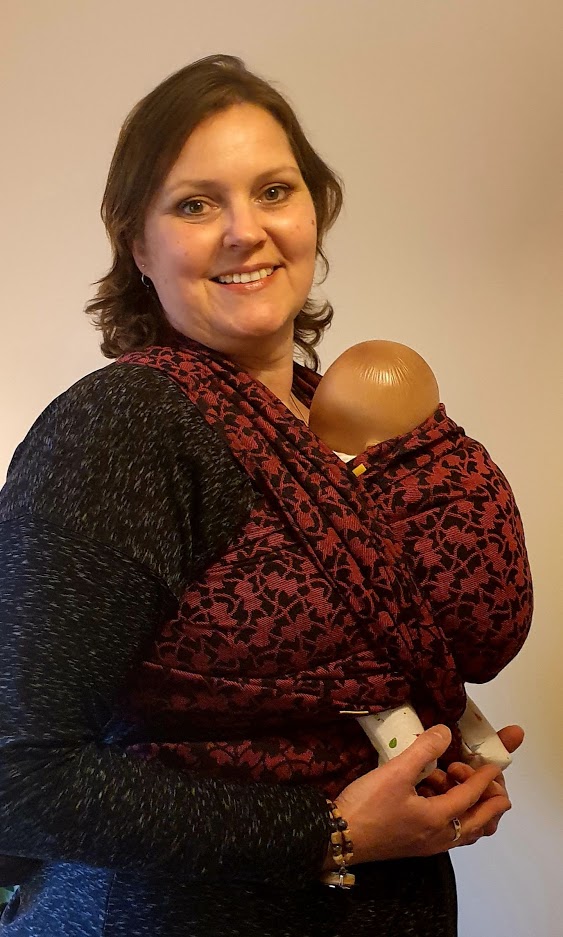 I dabbled in using slings when my first baby was born in 2006.  At the time, in Leighton Buzzard, Bedfordshire, no one I knew was using slings; Gina Ford routines were the norm and even breastfeeding beyond the first month or so was considered a bit fringe!  Already known as the crazy hippy mummy among my peers for rejecting sleep training and wanting to go with the flow a bit, I sort of felt I had an image to uphold.  I also had a baby who was fretful and hard to settle (due to a difficult birth and problematic early feeding journey) and, contrary to popular opinion, I had a feeling that keeping my baby close and upright might help.  I decided would pop my baby in a sling and Bob’s your uncle, problem solved, right?

Wrong!  My baby didn’t like the first carrier we bought (a bright red contraption with assorted straps of varying lengths and randomly placed padded bits, which didn’t seem to match up to either my own anatomy, nor that of my child) and the second one didn’t feel safe (a baggy, pouchy affair adorned with drawstrings that seemed designed to hold a sack full of babies, or maybe a medium sized dog).  We persevered for a while with both but eventually gave up on the whole enterprise and resorted to good old carrying until your back breaks and your arms fall off and then passing the baby over to another adult until their back breaks and their arms fall off.  Switch and repeat.  It worked a treat!

By the time my second baby was born in 2007 I was a lot more savvy.  I knew that there was no way I would be able to cope with two babies under two without a method of strapping one or both to my body.  I knew the double buggy would be a liability and limit our mobility and access options.  I also knew a lot more about attachment theory, baby brain development and what it is that human babies actually need to be calm and happy.  We bought a ring sling and hoped for the best.  My second child was born strong and roaring with marvellous head control and an insatiable need to be physically attached to my boobs at all times.  The ring sling became his happy place.  He basically lived in there, snuggled against my chest for the first few months, then lounging on my hip with his elbow over the top like an extra from Grease for the next year.  Because the ring sling was such a success I never branched out into other styles or tried anything else.  I’d found my babywearing happy place.

As my children got older and I began supporting other families in the transition to parenthood, I learned more and more about the benefits of keeping babies close, for both babies and their carers, not least in enhancing and facilitating the breastfeeding relationship.  I learned about the massive, everchanging variety of slings, carriers and wraps on the market, and I watched parents get sucked into the black hole of consumerism and the hunt for sling perfection.  I felt lucky to have sidestepped all of that back when I was regularly “wearing” my own child.  As the years passed and sling use became more mainstream and normalised (as it was throughout history and still is in most of the world; our century of prams and travel systems is, probably, just a blip), I was delighted to see babies in slings everywhere I looked.

As an antenatal teacher I introduce expectant parents to the idea that, as apes, we are carrying mammals and so their baby is likely to find being put down quite challenging.  Most new parents are surprised by this concept and immediately look for solutions to the (perceived) problem.  This is a lovely way to introduce babywearing as an option and discuss some of the benefits.

As a postnatal doula I support parents and carers to find ways to meet their babies’ needs; ways that have to work for and support their own needs too.  Often, babywearing seems to fit that brief:

Because I seemed to be talking about babywearing so much and so many parents were asking me for help with their slings and carriers, I decided the time had come to up my game…

…I am abso-flippin-lutely delighted to announce that I am now offering babywearing consultancy as part of my doula service, having completed the Slingababy Baby-carrying Consultant Course in November.

I’ve also caught the collecting bug (yikes!) and I’m slowly building up my own stock of quality slings, wraps and carriers with a view to developing a sling library service in the coming year.

If you would like to discuss how I can help you build your confidence and skill at wearing your child, drop me a message via the website and we’ll have a chat.

Want to join the discussion?
Feel free to contribute!

Lucy PedderThe third stage – the birth of your baby’s placenta.
Scroll to top