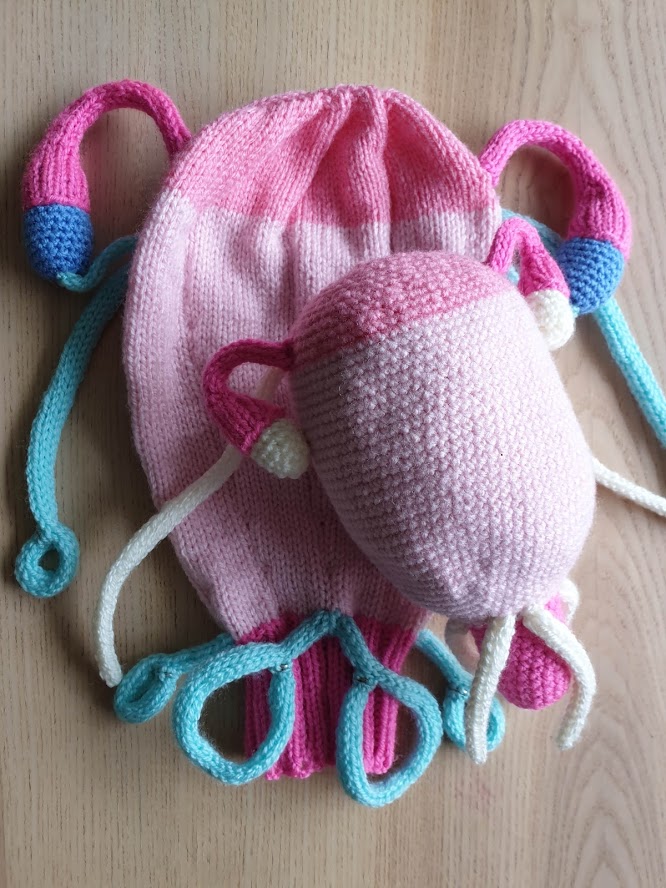 Why my Etsy shop is “on Vacation”

I’ve loved to knit for as long as I can remember.

I think my grandmother taught me the basics when I was about four, and she, my Mum and an aunt encouraged and helped me progress. I was never a big fan of the clichéd baby-clothes-and-stuffed-toys type of knitting, although I’ve done my share of that, but rather I preferred large, expressive, or abstract pieces that told a story.  By the time I was in my 20s I had added crochet to my repertoire and then a little macramé.  The idea of gradually working continuous pieces of yarn, string or thread into complex, three-dimensional forms that can actually be useful has always intrigued me and feels somehow magical.

When my children were small (and my time and energy was squeezed) I did try to make clothes for them; memorably, there were the two jumpers with designs drawn by the kids themselves, that took so long to make that they we’re grown out of practically before they were finished.  And I did occasionally take on bigger projects; the tweedy, Aran, cable sweater for my 6’2” brother that took so long and sapped so much of my soul that I ended up refusing to finish the sleeves and gave it to him as a waistcoat!  In general, though, I put away my hooks and needles and didn’t really miss them.

As the kids got older and I found I was able to turn some of my creative energies away from them and towards other passions, I began to rediscover and nurture my woolly tendencies again.  I mainly made blankets, bowls and bags, but, as a perinatal practitioner, I grew to understood the value of a whimsically colourful knitted boob to break down anxieties around breastfeeding, or a piece of mustard-yellow crochet in a doll’s nappy to get expectant parents laughing about baby poo.  Other practitioners started to notice and I made a few pieces for friends and colleagues.

And so a business idea was seeded and The Crafty Lucy (TCL) was born.  I still wanted to sell blankets bowls and bags but, as a birth educator with a background in anatomy and physiology, it was inevitable that I would specialise in anatomical models for birth folk.  I started by designing a uterus that could be used with a model pelvis to demonstrate how contractions work and illustrate the role of the uterine ligaments.

I opened an Etsy shop, designed more models, and started taking orders.  Very quickly I found that I was selling to birth folk around the world.  The orders were backing up, the stress levels were rising and I was spending ALL my “free” time knitting and crocheting.  It got to the point that I would dread opening the Etsy app and seeing another sale.  I felt so ungrateful for my success and kept soldiering on, frequently knitting through the night to make the deadlines.  Eventually, after only eight months I decided that I had had enough.  I put the Etsy shop into “vacation mode” (yes, that’s a thing) and worked hard to clear my existing orders.  After another six weeks I had cleared the backlog and the sense of freedom and relief was extraordinary.  My stock of unsold bags and bowls were donated, gifted, or utilised at home once Covid-19 caused all upcoming craft fairs to cancel, and I immediately embarked on an ambitions crochet project just for ME.  With no customers waiting in the wings full of expectation I had rediscovered my love for the craft.

And so, with a steady stream of tentative enquiries to my still-closed Etsy shop about when I’m going to start selling again, I’ve reached a decision.  I am going to write up my patterns and sell them instead.  I did tentatively put my toe into these particular waters a while ago but wasn’t quite brave enough to go through with it.  I’ve now decided that I honestly don’t want to take commissions for my models any more but I certainly don’t want to stop sharing them with the world, and I really don’t mind other people using and adapting my ideas (as long as they credit me!), so I’m going to create….  The Crafty Lucy pattern book…  Watch this space.

Is my baby broken?
Scroll to top